Are you also in the same dilemma as I am? Worry, not! Today, I am here to let you know the “Can iPhone users see when Android users are typing?”

So, if you see all around the modern tech the idea of instant messaging is said to be one of the easiest ways out there for sending messages between Android and iPhone smartphones. As a result of this, a person knows whether the other person is typing to you or not.

This feature is mostly enabled in some of the top-rank apps comprising Whatsapp, Telegram, iMessage, RCS chat, and other popular apps. However, I prefer mostly using Whatsapp and iMessage.

Thus, one more question arises to this is that when a person wants to know if someone is typing or not, how can the iPhone users know whether the Android users are typing to him/her and, vice-versa?

This gradually brings us to the topic of the day. So, come around and move ahead in knowing it in detail.

Can iPhone Users see when Android Users are Typing?

Without a doubt, no. This is so because if you see the iMessage app is not suitable for working on either Android phones or tablets. As a result, the iPhone users will never to able to see whether the Android users are typing to them or not.

When using Whatsapp, Facebook Messenger, and other apps, iPhone users will only be able to see what android users are typing. So, coming back to today’s discussion “can an iPhone user see when the Android user is typing?”

You’re referring to iMessage since when you type on it, both parties involved will see it. The major issue in this is that the iMessage app is only made compatible to work with the iOS devices such as your iPhone, iPad, Mac, and even iPod.

Android now has its messaging app called RCS (Rich Communication Services) chat message, which can be used instead of iMessage. The RCS chat feature’s only drawback is that it isn’t available everywhere.

At present, it only works in the most advanced countries like the United States, Canada, and the United Kingdom. Also, because not all service network providers offer Android RCS chat, it has a lot of limitations.

Thus, the RCS chat application introduced in the year 2020 is compatible to works only on Android smartphones and is not suitable for working either on iPhones or iPads.

When it comes to iMessage and SMS text messages, iPhone users can’t view what android users are typing. Still, I suggest a pro alternative to this. So, come be with me in knowing the alternative!

Pro Alternative: For Knowing when Android Users are Typing to the iPhone Users?

Thus, you simply need to open your Whatsapp app and begin with the step. You need to send a message specifically to the Android or the tablet user, and finally, you will be able to see and know the time when the user started typing to you or reacting to any of your Whatsapp messages.

You’ll also know if the person who received your WhatsApp message read it. If you don’t want to use Whatsapp, which is the greatest choice I can recommend, use Skype or Facebook Messenger instead.

But Whatsapp is the greatest because you already have the person’s phone number and don’t have to ask them for their Skype or Facebook names.

1. Is it possible for iPhone users to know when Android users type?

Ans. No, is the quick response. The RCS and SMS/MMS protocols are used by Android to send the bulk of text communications. And, as a result of this, it does not have the facility for knowing the exact time the message was opened and typed to revert it.

However, Android and iPhone users can view the typing indication of the message via other chat messaging apps like Whatsapp or Facebook. But, this won’t work for indication of typing if you use any text messages from the phone.

Only when the two iPhone users are in a chat can the indicator of typing awareness be shown. Android devices lack texting software capable of supporting such capabilities.

If two Android or iPhone users are using an online chat app and both can see the typing indicator, they are communicating.

2. On Android, how can you know whether someone is typing?

Ans. Yes, Google has finally integrated RCS messaging to Android, allowing users to view read receipts and typing indicators while texting, two features that were previously only available on iPhones.

3. Is it possible for Android users to see when you like a text?

Ans. However, only if advanced text messaging features are activated in addition to normal text messaging capabilities. They must have it enabled for you to see that you enjoy their text message.

And, so, you need to enable the feature for seeing their messages, otherwise, you will not be able to see their SMS until you press the option.

4. Is it possible for an iPhone to restrict Android texts?

Ans. This can be accomplished without the use of a third-party message blocker; messages on iPhones and Android phones can be blocked using the device’s settings.

5. When Do Not Disturb is enabled on Android, what happens to texts?

Ans. Incoming calls are directed to voicemail while Do Not Disturb is on, and you are unaware of any phone calls or text messages that have been received. Because it disables all notifications, you won’t be distracted while you’re working.

6. Why would an iPhone text message be sent?

Ans. Any communication made to a person who is not using any iOS device will receive the communication as a usual text message. The only devices that can use the iMessaging system are those made by Apple.

And, thus, if sometimes it happens that your iMessage is not delivered, or if the receiver phone does not support the iMessage, your iPhone will send a text message to that particular person.

7. What happens if you send an SMS to a blocked phone number?

Ans. If someone had blocked you, all their text messages simply sit there as an “i” button, as if it was sent to the receiver but not received by that particular recipient.

We hope you find this material to be quite useful. If so, please share it with all of your iPhone users so that they, too, may utilize this way to make their chat box much more beautiful.

However, if you still find any difficulty in finding out, “Can iPhone users see when Android users are typing?”, you can surely come to us, Our team always welcomes everyone to solve their query. And, will even be happy to assist you with your problem.

Did your iPhone mute an essential call that you missed? You might have missed the warning or your calls may …

Are you struggling to rename a photo or photo album on iPhone? Here is a guide on How to rename …

Do you want to know What is Sound Check on iPhone? or What does sound check do on iPhone? strive …

Are you looking for the best way on how to put a call on hold on iPhone? Here is a … 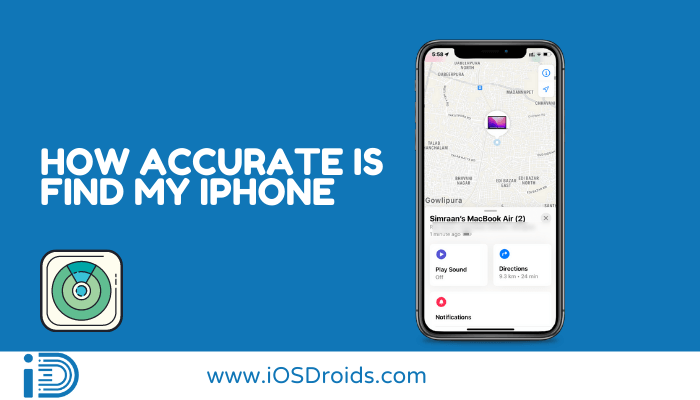 Are you looking to check How accurate is Find my iPhone? We’ve all had that heartbreaking moment when we reach …

Are you searching for blogs that teach you rightly know how to speed up a video on iPhone? Here, you …